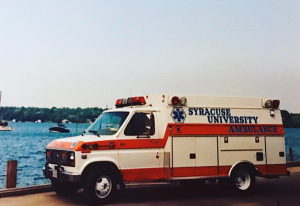 Syracuse University Ambulance (SUA) was started in the Fall of 1973 as a campus Emergency Medical Unit and the members would help cover campus events as first aid staff and act as a foot responder to campus medical emergency calls. The first Ambulance was purchased as a used ambulance with funding from the SU development fund. In 1977 with the risk of the organization going out of service due to the condition of the used ambulance, Student Association was able to provide funding to allow the organization to purchase a new ambulance. Training for new members consisted of approx. 20 hours of in-house training and now consists of in-house training and testing as a new member followed by the NYS EMT Class which is approx. 150 hours.

A quote from a March 1979 Daily Orange article: Five years ago when we formed, it was like “look at those kids on the hill playing ambulance” but now that our performance has been proven those people think differently.

In 1998, SUA was able to purchase a Medical Support Unit (MSU) which would provide additional resources such as medical supplies and equipment for large campus events or as a mutual aid unit in Onondaga County. In 1994, SUA was named NYS EMS agency of the year by the NYS DOH EMS which was a very proud moment for all of the current and past members that had helped the agency grow over the years.

Currently we have Two NYS Basis Life Support Ambulances as well as a Supervisors vehicle which is NYS AEMT capable. We also maintain a stocked Medical Support Unit, which we use for large campus events (Juice Jam/Mayfest) and as mutual aid to city/county agencies for off campus Multiple Casualty Incidents (MCI). We currently have 74 active members that provide 24/7 EMS coverage to the campus community during the academic year and we are currently on track to exceed 1600 calls for emergency service this academic year.

This year with the help of DPS, EHSS, and Exercise Science, SUA received the Heartsafe Campus accreditation from the National Colligate Emergency Medical Foundation at the annual conference in Boston.

More from this Section